This area is exclusively for members of FOR Cardiff, this is where you can register/request ‘The Card’ and see the 100+ offers available to our members. If you're not sure if you're a member please check here or email us on info@forcardiff.com

Cardiff Community Alcohol Partnership has received a national award for its work promoting safe drinking among the city’s student population.

CAP co-chair Ian Tumelty, Business Crime Reduction Manager at FOR Cardiff, Cardiff Against Business Crime and coordinator of the Cardiff Business Partnership Night-Time Economy Group, was at CAP’s celebration event at Westminster on June 6 to receive the award.

The award was presented by Miles Beale, Chief Executive of the Wine and Spirit Trade Association. He said:

“I am delighted to present this award for work in reaching out to 18-25 year olds to Cardiff CAP, which has worked so hard to reduce anti-social behaviour, alcohol-related violence and health risks from high levels of intoxication among students.

The Cardiff CAP was set up in 2018 – the first to address alcohol use in the student population – working alongside the universities and college, students’ unions, police, Cardiff Council, the Cardiff and Vale Local Public Health Team and the night-time economy.

Cardiff CAP is a fantastic example of the power of partnership to bring together and build a fantastic range of resources, training and support to encourage the positive health and wellbeing of its student population.  Many congratulations to Lauren, Ian and to Cardiff CAP.” 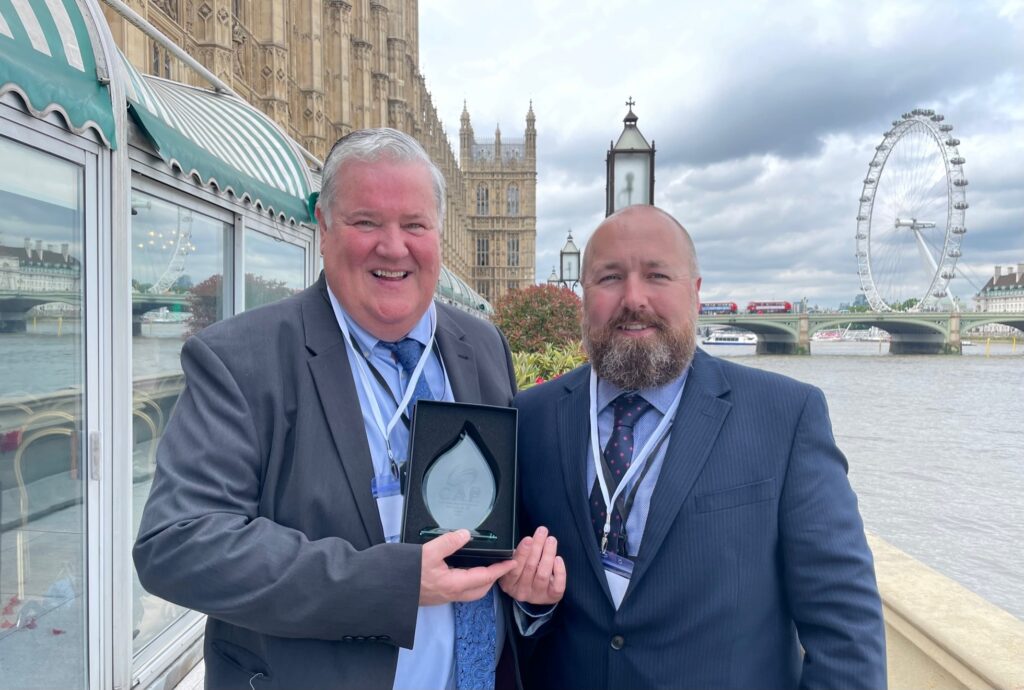 Since CAP was created 15 years ago, more than 250 schemes have been launched in England, Scotland and Wales. They bring together local stakeholders with a shared interest in preventing underage drinking and encouraging responsible drinking among young adults.

CAP partnerships are made up of retailers, local authorities, police, schools, neighbourhood groups and health providers, all working together to protect young people from alcohol harm.

In January 2020, the Cardiff Community Alcohol Partnership was awarded CAP of the Year (Wales) at the annual CAP celebration at the House of Lords.

CAP’s annual report, launched at the event, shows how this innovative partnership approach has brought significant reductions to children’s drinking, anti-social behaviour and underage sales in areas where it has created local partnerships.

“I’m delighted that in CAP areas around the country we are seeing such sustained reductions in regular drinking and anti-social behaviour among young people. CAPs are having a significant impact on reducing children’s alcohol consumption, improving their health and wellbeing and enhancing the communities where they live.”

Families flock to Cardiff’s FREE immersive light and sound spectacular inspired by Welsh folklore
Located in the heart of Cardiff, the global premiere of ‘The Light of Winter / Goleuni’r Gaeaf’ installation expects to attract thousands of visitors to the city centre over the winter period. A NEW light and…
View More
FOR Cardiff members urged to take action to help Cardiff become one of the UK’s most sustainable cities
This month Food Cardiff is asking FOR Cardiff members businesses to help Cardiff become one of the UK’s most sustainable food places by 2024. Last year, Cardiff was awarded Silver Sustainable Food Places status – becoming…
View More
Roxy Lanes is Coming to Cardiff
Roxy Leisure are set to be bringing their competitive gaming concept to the Welsh capital next year. The latest Roxy Lanes site will be located on Queen Street in Cardiff’s city centre, and will feature an…
View More
We use cookies on our website to give you the most relevant experience by remembering your preferences and repeat visits. By clicking “Accept All”, you consent to the use of ALL the cookies. However, you may visit "Cookie Settings" to provide a controlled consent.
Cookie SettingsAccept All
Manage consent

This website uses cookies to improve your experience while you navigate through the website. Out of these, the cookies that are categorized as necessary are stored on your browser as they are essential for the working of basic functionalities of the website. We also use third-party cookies that help us analyze and understand how you use this website. These cookies will be stored in your browser only with your consent. You also have the option to opt-out of these cookies. But opting out of some of these cookies may affect your browsing experience.
Necessary Always Enabled
Necessary cookies are absolutely essential for the website to function properly. These cookies ensure basic functionalities and security features of the website, anonymously.
Functional
Functional cookies help to perform certain functionalities like sharing the content of the website on social media platforms, collect feedbacks, and other third-party features.
Performance
Performance cookies are used to understand and analyze the key performance indexes of the website which helps in delivering a better user experience for the visitors.
Analytics
Analytical cookies are used to understand how visitors interact with the website. These cookies help provide information on metrics the number of visitors, bounce rate, traffic source, etc.
Advertisement
Advertisement cookies are used to provide visitors with relevant ads and marketing campaigns. These cookies track visitors across websites and collect information to provide customized ads.
Others
Other uncategorized cookies are those that are being analyzed and have not been classified into a category as yet.
SAVE & ACCEPT