This area is exclusively for members of FOR Cardiff, this is where you can register/request ‘The Card’ and see the 100+ offers available to our members. If you're not sure if you're a member please check here or email us on info@forcardiff.com

A unique installation has arrived in Cardiff city centre, created by FOR Cardiff, marking Wales’ capital as the place to be when Rob Page’s team kick off their first football World Cup since 1958.

Situated on Central Square, outside Cardiff Central Station, the installations featured songs that were decided through a public vote, with Yma o Hyd and Calon Lan selected as the most popular anthems. 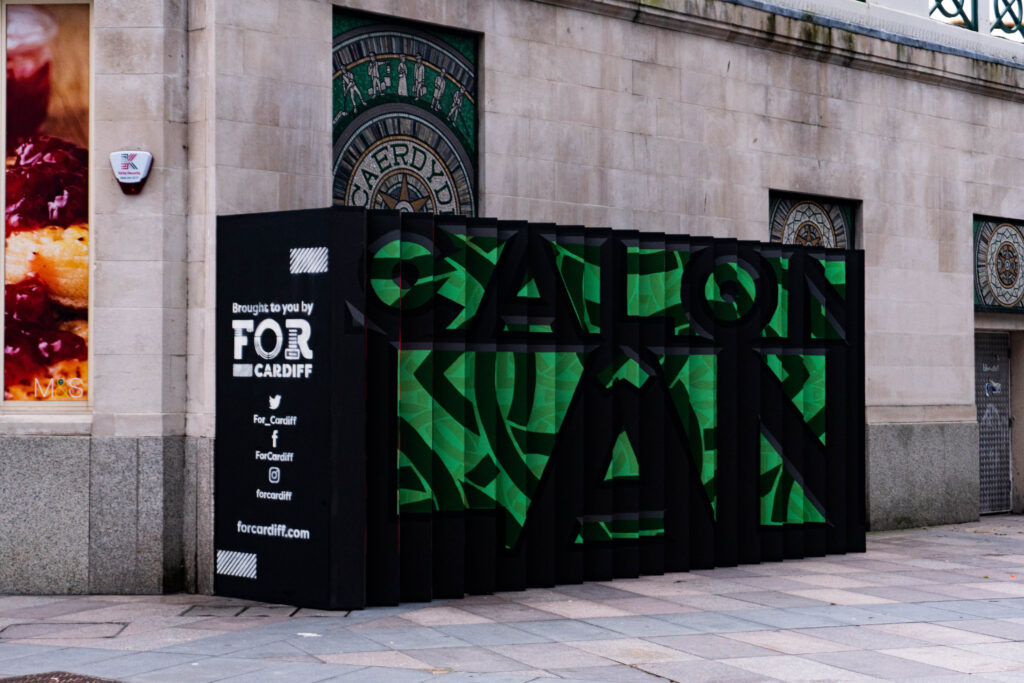 In place until mid-December, the mind-bending lenticular installation changes as the viewer moves from side to side, providing fans with the chance to pick their favourite song for a selfie.

As well as the World Cup Qatar, the Autumn Internationals are bringing in the rugby fans, with Wales facing the southern-hemisphere greats in front of 70,000+ fans each week at the Principality Stadium; a city-centre venue which alone generates £130million for the local economy every year.

With Cymru kicking off their historic World Cup Qatar campaign with a highly anticipated match against the USA on 21st November, yet again, bars and restaurants will be packed with fans hoping to see Gareth Bale’s squad build on their recent successes and put Wales on the map as a football force to be reckoned with.

Local businesses are hoping the upcoming sporting events will see a much-needed boost in business in the run-up to Christmas. 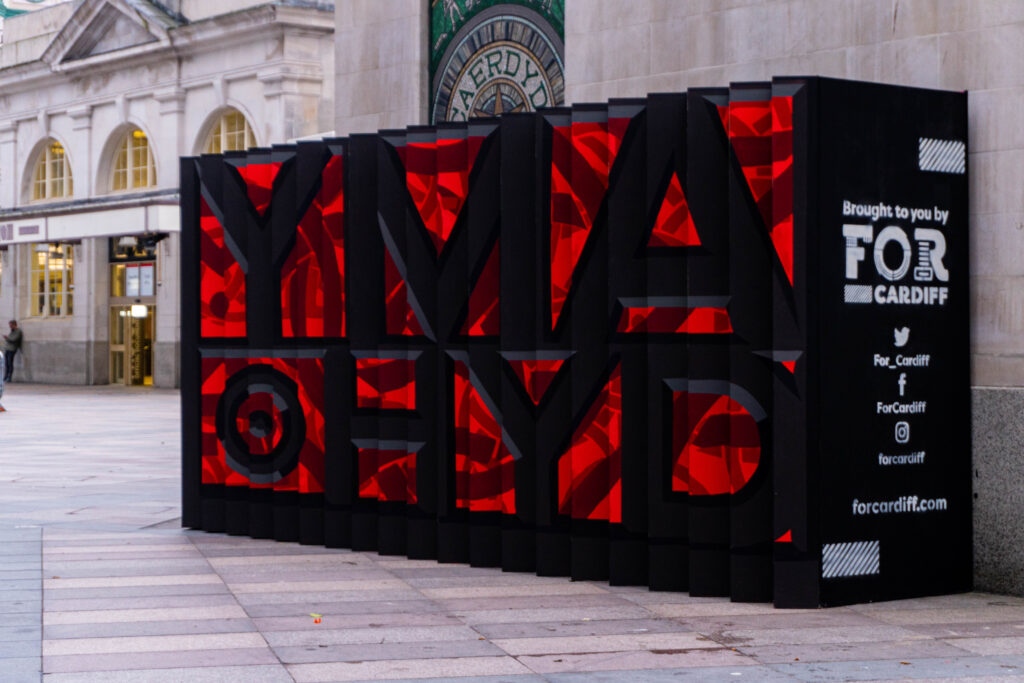 “City centre licensed premises are really excited about the return of the Autumn Internationals – without restrictions – and of course, the start of the World Cup Qatar with the added joyous involvement of Wales!

“In pubs and bars, we love it when Wales are playing at home, and many of us working will have fantastic memories of the successful Euros campaign back in 2016. What has also been noticeable for us is how busy it gets when Wales is playing away from home too. I put this down to the popularity of the Wales football team and their fantastic supporters!

“I know that many of our venues will be showing all the games, and even though some of the matches have early morning kick-offs, we anticipate seeing enthusiastic supporters coming in to watch the team and share the experience. I also know that our pubs and bars will be putting on their best hospitality faces to welcome Wales supporters and cheer their progress through the tournament.”

The economic impact is anticipated to be positive, as businesses all over Cardiff will finally get the opportunity to operate during this busy time with no restrictions.

“With so much national achievement to be celebrated this Autumn/Winter, Cardiff is the place to be to do it. This unique installation is placed in the heart of the city centre for all sports fans to engage with over the next two months, offering the perfect celebratory centrepiece as Wales cements itself as a sporting nation to be reckoned with on the global stage.

“It is a truly exciting time for Welsh sport and made even more exciting as this is the first Autumn for over two years where no Covid restrictions are in place, meaning the expected footfall around the city centre will be at levels not seen for a long time.”

The installation is in place from now until mid-December. Fans are encouraged to share a selfie with their favourite song and tag FOR Cardiff.

Families flock to Cardiff’s FREE immersive light and sound spectacular inspired by Welsh folklore
Located in the heart of Cardiff, the global premiere of ‘The Light of Winter / Goleuni’r Gaeaf’ installation expects to attract thousands of visitors to the city centre over the winter period. A NEW light and…
View More
FOR Cardiff members urged to take action to help Cardiff become one of the UK’s most sustainable cities
This month Food Cardiff is asking FOR Cardiff members businesses to help Cardiff become one of the UK’s most sustainable food places by 2024. Last year, Cardiff was awarded Silver Sustainable Food Places status – becoming…
View More
Roxy Lanes is Coming to Cardiff
Roxy Leisure are set to be bringing their competitive gaming concept to the Welsh capital next year. The latest Roxy Lanes site will be located on Queen Street in Cardiff’s city centre, and will feature an…
View More
We use cookies on our website to give you the most relevant experience by remembering your preferences and repeat visits. By clicking “Accept All”, you consent to the use of ALL the cookies. However, you may visit "Cookie Settings" to provide a controlled consent.
Cookie SettingsAccept All
Manage consent

This website uses cookies to improve your experience while you navigate through the website. Out of these, the cookies that are categorized as necessary are stored on your browser as they are essential for the working of basic functionalities of the website. We also use third-party cookies that help us analyze and understand how you use this website. These cookies will be stored in your browser only with your consent. You also have the option to opt-out of these cookies. But opting out of some of these cookies may affect your browsing experience.
Necessary Always Enabled
Necessary cookies are absolutely essential for the website to function properly. These cookies ensure basic functionalities and security features of the website, anonymously.
Functional
Functional cookies help to perform certain functionalities like sharing the content of the website on social media platforms, collect feedbacks, and other third-party features.
Performance
Performance cookies are used to understand and analyze the key performance indexes of the website which helps in delivering a better user experience for the visitors.
Analytics
Analytical cookies are used to understand how visitors interact with the website. These cookies help provide information on metrics the number of visitors, bounce rate, traffic source, etc.
Advertisement
Advertisement cookies are used to provide visitors with relevant ads and marketing campaigns. These cookies track visitors across websites and collect information to provide customized ads.
Others
Other uncategorized cookies are those that are being analyzed and have not been classified into a category as yet.
SAVE & ACCEPT